Rural America is mad. We’re hearing from people in places like West Virginia, Ohio, and Pennsylvania who are fed up with the government, the economy, the “establishment,” and taking out their anger at Trump rallies.

While the coverage is new, the anger is not. Donald Trump is today’s release valve, the latest in a line that has included the anti-government and militia movements, drug epidemics, and the Tea Party. This year’s support for Trump, of course, goes far beyond rural voters. A recent New York Times analysis finds support for Trump is strongest in places where “white identity mixes with long-simmering economic dysfunctions,” cutting across other traditional political lines.

But what has too long been overlooked is how much of that economic dysfunction—and the anger it has caused—goes back to the dissolution of the family farm.

…Read the rest at Civil Eats…

A short series written for WhyHunger about activist Midwestern farmers. The research for this material was funded by the generous donors to the Real Milk Stories Indiegogo campaign.

Farmers are “in” right now. With today’s trend towards local food and sustainable agriculture, farmers are making the news, appearing on lists of most influential people and changemakers. The farmers we hear most about seem to be in or near cities, often new to the field, raising vegetables, selling at farmers markets. We’ve read the articles about rooftop farmers in Brooklyn and vegetable farmers growing heirloom varieties for Berkeley restaurants. They all deserve the recognition; because farming is hard work any way you do it.

But there are a lot of farmers we do not often hear about. Most farmers are not growing vegetables for direct markets, and most of the food Americans eat doesn’t come from farmers markets. Corn and soybean acreage is 36 times that of vegetables, while the value of the top five commodities (corn, soybeans, animal products) is 200 times that of direct sale items. Most farmers, therefore, live far from cities, raise corn and soybeans and livestock, and sell into commodity markets, not farmers markets. And (surprise!) many of them are trying to change the system they’re in—by using fewer chemicals, or planting cover crops, or making the three-year transition to growing organically or looking for a local market for their product. Even bigger surprise: some of these rural commodity farmers are outspoken activists, organizing against policies and practices that hurt the land and their communities.

It’s one thing to advocate for a sustainable food system from Brooklyn or Berkeley, but quite another in a place where your neighbors may think you’re crazy for not using genetically modified seed or for restoring a few acres of native prairie; where any change you make could cost your livelihood or your relationships; where the herbicide salesman is your nephew and everywhere you turn you are reminded that you are “feeding the world.” But organizing and changemaking are also more urgent in the heartland, when the farms being sold off belonged to your friends, or you have to drive another hour for groceries because all the stores downtown closed, or your kids are getting sick from pesticide drift. To make change in the belly of the beast—in the places most of our food comes from and where agribusiness has a strong hold—takes conviction, hope and a willingness to risk being an outsider.

The US has a strong history of agrarian-led advocacy. There have been movements for what we now call sustainable agriculture for centuries; most led not by people in urban centers, but by rural farmers. In the 1890s, farmers across the country realized that the struggles they faced were more a result of economic and social policies than personal failings, and built a broad coalition and a strong movement, Populism and the People’s Party, to change the system.

Nearly a century later, skyrocketing debt payments and a drop in exports led to the 1980s farm crisis. Hundreds of thousands of farms went into foreclosure; with fewer farmers, rural businesses failed, downtowns vacated and rural communities withered. Throughout the crisis, farmers fought back, protesting at state houses and in Washington, fighting through the courts and in the court of popular opinion, using tractorcades and white crosses marking the loss of farms to call the nation’s attention to the countryside. A Supreme Court decision eventually stopped the foreclosures, but the crisis in farm country did not end, it changed to a slow burn.

In the last thirty years, farms have gotten increasingly larger, equipment and inputs more expensive, and dramatic consolidation has shrunk farmers’ market options. The prices farmers receive for their goods dropped precipitously following the removal of all price stabilizations in the 1996 farm bill, and a patchwork of subsidies and insurance has not made up the difference. Throughout the 1990s, the fight became about confined animal operations, or factory farms. Citizen action in states like Minnesota and Missouri kept these states from being completely overrun by factory farms then and continues to be critical in demanding state enforcement of factory farm rules. Grassroots organizations such as Iowa Citizens for Community Improvement, Missouri Rural Crisis Center, (Minnesota) Land Stewardship Project, and the Western Organization of Resource Councils have rallied their farmer and rural members (along with urbanites) for decades on these and other fights, and continue to do so today. Through it all, there have also been the quiet farmers—those who may not have actively protested, but instead resisted by changing their own farming or land stewardship practices and influencing their neighbors to do the same.

The profiles in this series tell the stories of how three modern rural Midwestern farmers have carried on this legacy and are working to make change in their communities.

Denise O’Brien became an organic farmer in Iowa on her husband’s fourth generation family farm, and was soon a leader in the fight against the foreclosures of the farm crisis, focusing especially on the struggles of rural women. She has worked at many levels—grassroots advocacy, non-profits, national, international, in the soil—with common threads of feminism and caring for the land and her community running throughout.

Roger Allison raises livestock on a traditional small family farm in Missouri, and has been in the trenches fighting for small farmers for forty years. The organization he founded, Missouri Rural Crisis Center, continues to be one of the strongest grassroots voices in rural America.

Molly Breslin and her father John have been less active politically, but have created a cultural shift in their Illinois farming community as they have transitioned their family land from conventional corn and soybeans to organic heirloom grains and beans.

Leaders like these are working rural land and speaking out in small towns all across the country. Their stories have much to teach all of us working for a healthier and more just food system, whether we live in a city, in the country or somewhere in between. To learn where we have been, we must reconnect with the radical elements of this nation’s agricultural history; in shaping the future, we must listen to those carrying on that legacy. 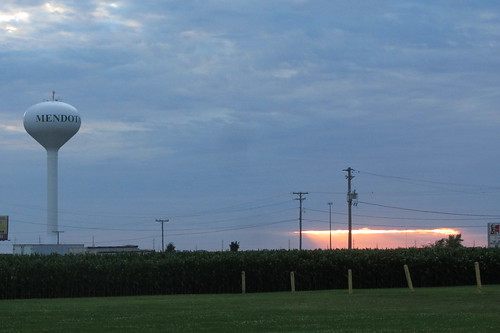